on October 06, 2018
In light of Mental Health week (first week of October), here is a short reflection by Xav about her experience at the Mental Health Festival 2018:


This year, the Institute of Mental Health (IMH) celebrates its 90th anniversary. To celebrate its 9 decades of establishment and to promote mental health, IMH’s Mental Health Festival 2018 was held on 8 September, from 9.30 am to 3 pm. Booths from the various mental health voluntary welfare organisations such as Clarity Singapore and Singapore Association for Mental Health (SAMH) were set up in the main lobby, with both staff and volunteers from these organisations warmly sharing information about mental health with the general public. Talks on the various types of mental illnesses, sharing by people with lived experiences, as well as informational workshops catered to both adults and children were held within the hospital compounds, drawing handfuls of participants and reaching full registration.

As a volunteer, I am thankful to be able to help out at the event and interact with those at the various booths. Several of these booths were not only manned by staff/volunteers but also beneficiaries and residents of the hospital who sold handmade items. Engaging these beneficiaries and residents in various art forms helps them to express themselves, and involving them in the selling process empowers them. The pride these individuals had when selling their items was definitely heartening to witness. 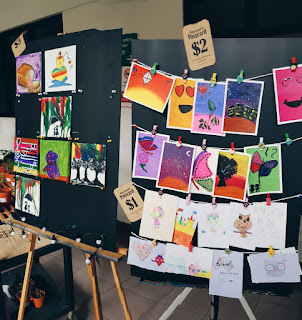 Lovely artworks by the IMH residents!

But these activities were not the only highlights of the Mental Health Festival. 8 September 2018 also marked the launch of the Beyond the Label, a nationwide campaign by the National Council of Social Service (NCSS) aimed to address stigma faced by people with mental health conditions and encourage conversations about mental health. The campaign was based on the Quality of Life Study by NCSS which found that 7 in 10 people with mental health conditions have a significantly lower quality of life, facing challenges with self-acceptance due to the stigma.

During the launch, publicity videos for the campaign (you can watch the videos here) were featured. The video on the social experiment on mental health stigma brought got many at the launch to tears. I was one of them. Personally, I think while spreading information about mental health is crucial in increasing awareness about the topic, affective attitudes are often hard to change even in light of hard evidence. Moreover, media portrayals of mental illnesses reinforce the very human tendency for confirmation bias. The videos, with their emotional appeal, have so much potential to persuade the general public without much information about mental illnesses, and to see those with lived experiences as individuals just like them. After all, there is empirical evidence that empathetic emotions can increase attitude changes. By giving a face to mental illnesses, it evokes emotions of empathy that could convince people that mental illness can happen to anyone.